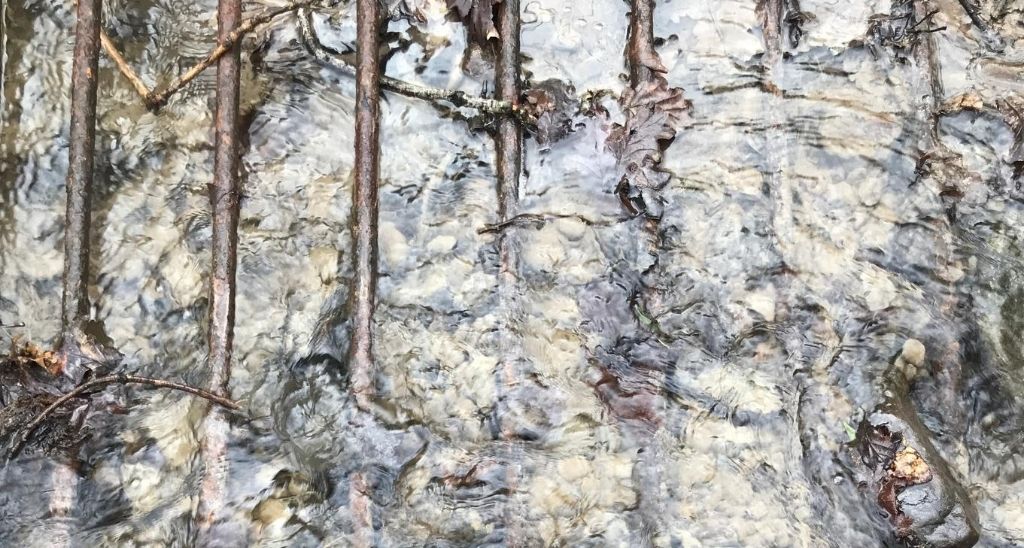 Yesterday I inspected the storm damage at the end of the valley.

We’ve had strong winds and heavy rain on already saturated ground. And with trees in full leaf, it’s a disaster waiting to happen.

The evidence of fallen trees and branches across the path was clear.

We know what to do with these. It’s a matter of getting out the chainsaw and clearing the limbs to make the paths usable again.

What’s more problematic are the trees in the overgrown woodland. However, unless they’re blocking anything, their best contribution is probably to be left where they are as new habitats for fungi, insects and other woodland creatures.

But what caught my attention, and consumed my energies, was the matting of branches, twigs, leaves and mud that had built up across the watergate.

The watergate is simply wire fencing across the top of the brook so that wandering sheep can’t get in.

But if the watergate gets choked, then the stream can’t flow. And ultimately a big surge in water coming off the mountain can completely topple the structure, rendering it useless.

Where do you start?

While big branches are the most obvious, they are often wedged in tight by the myriad of other materials caught up around them.

Instead, it’s a painstaking job of pulling out the smaller twigs and vegetation to loosen the area around the bigger branches. And even then, many are simply too big for me to do by myself.

The best I can do is to pick out the looser pieces, one layer at a time, and let the water help me clear some more.

As I’m doing this, I’m reflecting on how we deal with the significant issues in our lives or around us.

We want to clear the debris and enable the flow. Now.

Instead, it’s the painstaking job of dislodging the layers of stuff that we’ve built up to release the flow of water. Which then dislodges more materials. Naturally.

And eventually, with help, we can move the big issues. But trying to start with them is futile and breaks your back in the process.

In the meantime, sometimes the pressure of water gets so great that it does what water does well. It finds another route.

If we don’t deal with the obstruction, we might lose our opportunity. But on the other hand, we might find an even better solution.

PS The photograph is the original Victorian watergate, lying on the stream bed because at some point in the past the pressure became too much and the pillars fell (and the water found another route…)